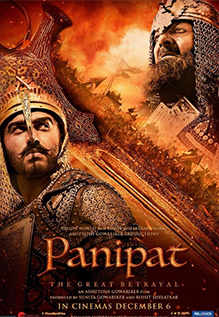 The film is based on the third battle of Panipat which took place on the 14 of January in 1761 between the Marathas and the King of Afghanistan, Ahmad Shah Abdali.

PANIPAT is set in 1761, when the Maratha Empire had reached its zenith and their grip on Hindostan reigned supreme with no-one to challenge them until an invader set his eyes on the throne of Hindostan. That’s when Sadashiv Rao Bhau (Arjun Kapoor), the Commander-in-Chief of the Maratha army led a northern expedition in order to repel the invading forces of Ahmad Shah Abdali (Sanjay Dutt), the King of Afghanistan. This War epic entails the events that led to the Third Battle of Panipat, watch it in cinemas on 6th December

A historically accurate and less dramatized picture with outstanding performances from the lead and supporting actors.
A VISUAL DELICACY FOR FANS OF HISTORICAL WAR FILM ON THE BIG SCREEN.
Because of his relationship with Salman’s sister-in-law Malaika Arora, Arjun Kapoor developed a strong bad image, and the film’s trailer was highly criticized as a result.

Kriti Sanon’s role was just as powerful and crucial as Arjun Kapoor’s, and she gave a heartfelt performance throughout the movie. After seeing Kriti’s previous films like Housefull 4, Luka Chuppi, and Dilwale, I assumed she’d be nothing more than a prop like Jacqueline Fernandez in star-studded flicks, but with Bareilly ki Barfi and now Panipat, she’s demonstrated her acting potential in character-driven roles.
Sanjay Dutt plays Ahmed Shah Abdali, a scary yet beautiful figure similar to Kancha Cheena in 2012’s Agneepath. After Dutt’s recent release from prison, I believe this film is his Khalnayak.

Unlike Ranveer Singh’s fictional and filmy portrayal of Muslim monarch Khiji in Padmaavat, Dutt’s performance as Muslim Afghan ruler Abdali is top-notch, authentic, and convincing.
This is Ashutosh Gowarikar’s best historical picture after Jodha Akbar, and it definitely deserves a lot of respect and acclaim from the public. This film could only have been made by Ashutosh Gowarikar. If Sanjay Leela Bhansali had directed this film, it would have been a similar love tragedy that would not have been half as good as Ashutosh’s.
ALL INDIANS WITH A PASSION FOR THEIR COUNTRY’S EPIC HISTORY SHOULD WATCH THIS.