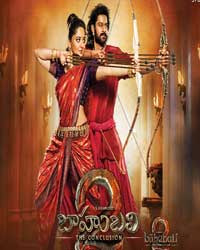 After learning that his father was brutally killed by Bhallaladeva, Mahendra Baahubali raises an army to defeat him and release his mother from the former’s captivity.

A strong story line built upon the enriches of Indian mythologies and it’s closely resembling characters. We have a very strong cultural background of Vedas, Puranas and the great mythological epics like Ramayana and Mahabharata. I grew up reading these big epics

Rajamouli’s magnum opus Baahubali 2- The Consclusion is definitely worth a watch for its grandeur and spectacular story telling. It’s a movie with a perfect cast and some fantastic and creative ideas. Don’t expect too much on the acting front- just go and watch it for the fun and grandeur. It manages to keep you engaged and before you go in for the conclusion watch Baahubali-The Beginning.

The heroine Anushka is well cast but seems to be physically inconsistent in many scenes. She appears to be alternating between size zero to plump (maybe the photo-shopping could not make it perfect). Thankfully her character is very consistent as the self respecting queen who doesn’t bow down and holds her own.

Sathyaraj as Katappa is intense, courageous and extremely funny.

Rana’s villainous Bhallaldeva will be a much hated character of Indian films. He looks and breathes evil. A menacing performance.

Ramya Krishnan and Nasser’s characters in this part were mostly uni-dimensional with a particular expression glued to their faces. Still they proved effective in their roles.

Then there is Prabhas who as the protagonist – Baahubali – has been given some of the most spectacular and grand scenes that a hero can ever get. He is this perfect king – a super hero with a heart of gold and immense strength. His scenes offer all the thrills and fun. He also gets the best lines when it comes to dialogues. When he dies, it’s heartbreaking and there is a huge void left in the movie.

Unlike the first part which had some great songs, tuned by Keeravani, which sadly were quite a distraction, the songs in the 2nd part are more in line with the theme except for the 2 songs on Anushka.

The song Sahore Baahubali sung wonderfully by the energetic Daler Mehndi and others and picturised spectacularly on Prabhas, is the pick of the lot. The stunts and settings are just breathtaking. You will definitely discover a new way to fly though the landing may be quite a mess (LOL).

Finally hats off to Rajamouli for dreaming it big and bringing it to life, onscreen, so wonderfully. He has given us something spectacular on a higher level. He has proved that Indian films is not just about Bollywood. He has brought Telugu films to the Indian and World audience with a bang. It may not be the best of Indian movies. But it’s a milestone Indian film in terms of entertainment and use of technology.

Just go for this thoroughly entertaining fantasy ride. You will have a good time.